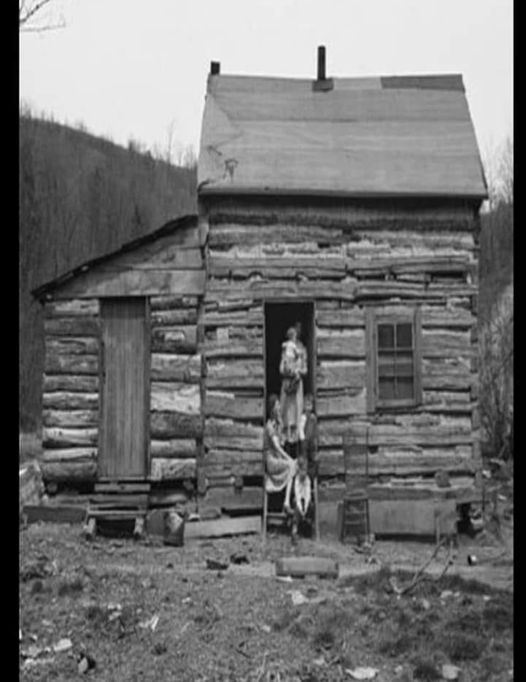 It was Christmas Eve 1942. I was fifteen years old and feeling like the world had caved in on me because there just hadn’t been enough money to buy me the rifle that I’d wanted for Christmas.

We did the chores early that night for some reason. I just figured Daddy wanted a little extra time so we could read in the Bible. After supper was over, I took my boots off and stretched out in front of the fireplace and waited for Daddy to get down the old Bible.

I was still feeling sorry for myself and, to be honest, I wasn’t in much of a mood to read Scriptures. But Daddy didn’t get the Bible instead he bundled up again and went outside. I couldn’t figure it out because we had already done all the chores. I didn’t worry about it long though I was too busy wallowing in self-pity.

Soon he came back in. It was a cold clear night out and there was ice in his beard. “Come on, Matt,” he said. “Bundle up good, it’s cold out tonight.” I was really upset then. Not only wasn’t I getting the rifle for Christmas, now he was dragging me out in the cold, and for no earthly reason that I could see. We’d already done all the chores, and I couldn’t think of anything else that needed doing, especially not on a night like this. But I knew he was not very patient at one dragging one’s feet when he’d told them to do something, so I got up and put my boots back on and got my coat. Mommy gave me a mysterious smile as I opened the door to leave the house. Something was up, but I didn’t know what.

Outside, I became even more dismayed. There in front of the house was the work team, already hitched to the big sled. Whatever it was we were going to do wasn’t going to be a short, quick, little job. I could tell. We never hitched up this sled unless we were going to haul a big load. Daddy was already up on the seat, reins in hand. I reluctantly climbed up beside him. The cold was already biting at me. I wasn’t happy. When I was on, Daddy pulled the sled around the house and stopped in front of the woodshed. He got off and I followed.

Then Daddy went into the woodshed and came out with an armload of wood – the wood I’d spent all summer hauling down from the mountain, and then all Fall sawing into blocks and splitting. What was he doing? Finally, I said something. I asked, “what are you doing?” You been by the Widow Jensen’s lately?” he asked. Mrs. Jensen lived about two miles down the road. Her husband had died a year or so before and left her with three children, the oldest being eight. Sure, I’d been by, but so what?

“I rode by just today,” he said. “Little Jakey was out digging around in the woodpile trying to find a few chips. They’re out of wood, Matt.” That was all he said and then he turned and went back into the woodshed for another armload of wood. I followed him. We loaded the sled so high that I began to wonder if the horses would be able to pull it. Finally, he called a halt to our loading then we went to the smoke house and he took down a big ham and a side of bacon. He handed them to me and told me to put them in the sled and wait. When he returned, he was carrying a sack of flour over his right shoulder and a smaller sack of something in his left hand.

“What’s in the little sack?” I asked. Shoes, they’re out of shoes. Little Jakey just had gunny sacks wrapped around his feet when he was out in the woodpile this morning. I got the children a little candy too. It just wouldn’t be Christmas without a little candy.”

We rode the two miles to Mrs. Jensen’s pretty much in silence. I tried to think through what Daddy was doing. We didn’t have much by worldly standards. Of course, we did have a big woodpile, though most of what was left now was still in the form of logs that I would have to saw into blocks and split before we could use it. We also had meat and flour, so we could spare that, but I knew we didn’t have any money, so why was he buying them shoes and candy? Really, why was he doing any of this? Widow Jensen had closer neighbors than us; it shouldn’t have been our concern.

We came in from the blind side of the Jensen house and unloaded the wood as quietly as possible then we took the meat and flour and shoes to the door. We knocked. The door opened a crack and a timid voice said, “Who is it?” “Lucas Miles, Ma’am, and my son, Matt, could we come in for a bit?”

Mrs. Jensen opened the door and let us in. She had a blanket wrapped around her shoulders. The children were wrapped in another and were sitting in front of the fireplace by a very small fire that hardly gave off any heat at all. Mrs. Jensen fumbled with a match and finally lit the lamp.

“We brought you a few things, Ma’am,” Daddy said and set down the sack of flour. I put the meat on the table. Then he handed her the sack that had the shoes in it. She opened it hesitantly and took the shoes out one pair at a time. There was a pair for her and one for each of the children – sturdy shoes, the best, shoes that would last. I watched her carefully. She bit her lower lip to keep it from trembling and then tears filled her eyes and started running down her cheeks. She looked up at my Daddy like she wanted to say something, but it wouldn’t come out.

“We brought a load of wood too, Ma’am,” he said. Then turned to me and said, “Matt, go bring in enough to last awhile. Let’s get that fire up to size and heat this place up.” I wasn’t the same person when I went back out to bring in the wood. I had a big lump in my throat and as much as I hate to admit it, there were tears in my eyes too. In my mind I kept seeing those three kids huddled around the fireplace and their mother standing there with tears running down her cheeks with so much gratitude in her heart that she couldn’t speak.

My heart swelled within me and a joy that I’d never known before filled my soul. I had given at Christmas many times before, but never when it had made so much difference. I could see we were literally saving the lives of these people.

I soon had the fire blazing and everyone’s spirits soared. The kids started giggling when Daddy handed them each a piece of candy and Mrs. Jensen looked on with a smile that probably hadn’t crossed her face for a long time. She finally turned to us. “God bless you,” she said. “I know the Lord has sent you. The children and I have been praying that he would send one of his angels to spare us.”

In spite of myself, the lump returned to my throat and the tears welled up in my eyes again. I’d never thought of my Daddy in those exact terms before, but after Widow Jensen mentioned it, I could see that it was probably true. I was sure that a better man than Daddy had never walked the earth. I started remembering all the times he had gone out of his way for Mommy and me, and many others. The list seemed endless as I thought on it.

Daddy insisted that everyone try on the shoes before we left. I was amazed when they all fit and I wondered how he had known what sizes to get. Then I guessed that if he was on an errand for the Lord that the Lord would make sure he got the right sizes.

Tears were running down Widow Jensen’s face again when we stood up to leave. My Daddy took each of the kids in his big arms and gave them a hug. They clung to him and didn’t want us to go. I could see that they missed their Daddy and I was glad that I still had mine.

At the door he turned to Widow Jensen and said, “The Mrs. wanted me to invite you and the children over for Christmas dinner tomorrow. The turkey will be more than the three of us can eat, and a man can get cantankerous if he has to eat turkey for too many meals. We’ll be by to get you about eleven. It’ll be nice to have some little ones around again. Matt, here, hasn’t been little for quite a spell.” I was the youngest. My two brothers and two sisters had all married and had moved away.

Mrs. Jensen nodded and said, “Thank you, Brother Miles. I don’t have to say, May the Lord bless you, I know for certain that He will.”

Out on the sled I felt a warmth that came from deep within and I didn’t even notice the cold. When we had gone a way, Daddy turned to me and said, “Matt, I want you to know something. Your Mother and me have been tucking a little money away here and there all year so we could buy that rifle for you, but we didn’t have quite enough.

Then yesterday a man who owed me a little money from years back came by to make things square. Your Mom and me were really excited, thinking that now we could get you that rifle, and I started into town this morning to do just that, but on the way, I saw little Jakey out scratching in the woodpile with his feet wrapped in those gunny sacks and I knew what I had to do. Son, I spent the money for shoes and a little candy for those children. I hope you understand.”

I understood, and my eyes became wet with tears again. I understood very well, and I was so glad Daddy had done it. Now the rifle seemed very low on my list of priorities. He had given me a lot more. He had given me the look on Mrs. Jensen’s face and the radiant smiles of her three children. For the rest of my life, Whenever I saw any of the Jensen’s, or split a block of wood, I remembered, and remembering brought back that same joy I felt riding home beside of my Daddy that night. He had given me much more than a rifle that night, he had given me the best Christmas of my life.

The Old Man, is passing it on

Liked it? Take a second to support The Old Man on Patreon! 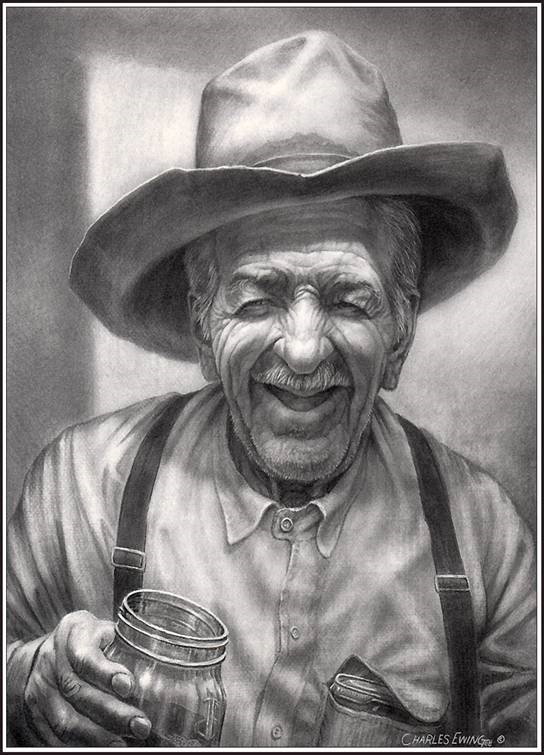 Your fences need to be horse-high, pig tight and bull-strong.
Keeps skunks and bankers and lawyers at a distance.
Life is simpler when you plow around the stump. 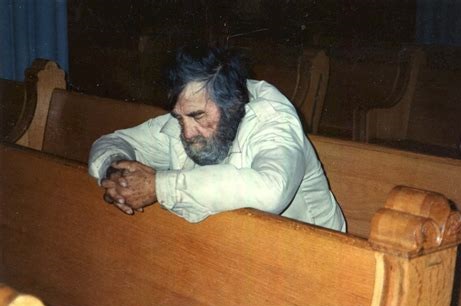 Did you see him at Church?

One day, a man went to visit a church. He got there early, parked his car, and got out. Another car pulled up and the driver got out and said,

Every cowboy I know, would trade all the days from here to then 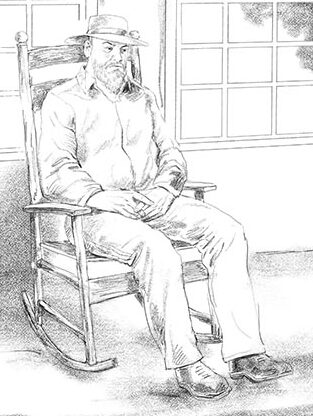 To my son and daughter, We tried so hard to make things better for you we made them worse. 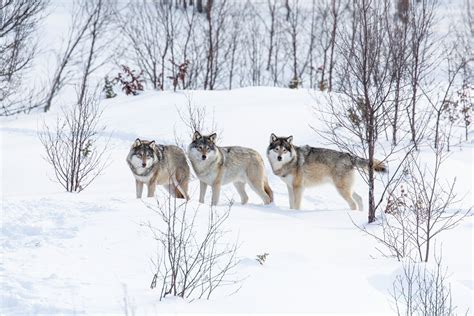 Today the wolves were in town. I hate this time of year, the snow blowing under porch seems to make the entire store cold. Like